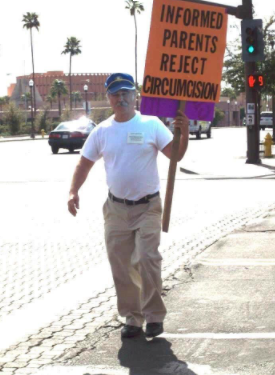 I crossed the threshold of awareness that I had been circumcised when I was about 12. Running naked on the farm driveway was a second cousin, who was about 6. His penis was remarkably pointed and tubelike, yet somehow covered. I learned he and his brothers were not circumcised. I largely just left it at that until I was in graduate school at Northwestern University in Evanston, Ill., in 1971 when I came across the Gore Vidal novel, “Myra Breckinridge.”

When I got to chapter 22, I was convicted by words spread across a mere two pages. Myra started out, “Just as I expected, seventy-two per cent of the male students are circumcised. At Clem’s party, I had been reminded of the promiscuous way in which American doctors circumcise males in childhood, a practice I highly disapproved of, agreeing with that publisher who is forever advertising in the New York Times Book Review, a work which proves that circumcision in necessary for only a very few men. For the rest, it constitutes in the advertiser’s phrase, ‘a rape of the penis.’” Myra later states, “Today only the poor Boston Irish, the Midwestern Poles and Appalachian Southerners can be counted upon to be complete.”

There was that word – complete. I was not complete. My penis had been raped. What would I have looked like whole? What would it have felt like? So began years of personal research, saving articles and assuring myself that should I have a son or grandson, they would remain whole.

Years later, while cleaning my parents’ vacant house, I found the Des Moines hospital-issued receipt for my mother’s stay. The entire bill for her hospitalization in 1946 was $83. “Other charges: Twin baby boys – $10.” My foreskin was zipped off for a mere $5! What a rip-off!

So when our son was born in 1975, I made it clear again and again to hospital staff that our son was NOT to be circumcised. We had the same success when both of our children had sons. Our grandsons were spared. And a nephew and his wife took the same route with their two sons. Friends have credited me for the information they needed to keep new sons intact.

I had a 40-year daily newspaper career as a reporter, editor and columnist. In 1987, I interviewed a nurse from the group, “Nurses for the Rights of the Child,” based in Santa Fe, N.M. I wrote an article for my daily paper, but a senior editor “spiked” it (killed it from publication), claiming circumcision was a non-issue and such an article was inappropriate.

A few years later, when I was religion editor, I wrote a column that pointed out that Congress had outlawed female genital mutilation, and asked why the hypocrisy and a double standard? Why was it legal for males’ genitals to be cut, but illegal when done to females? I also wrote an editorial page column regarding Arizona health officials ending Medicare coverage for circumcisions, determining it was not essential medical care. The state became the seventh state in 2002 to do so.

With the arrival of social media, I wrote numerous commentaries and blog posts, and have fired off countless letters to hospitals and doctors. I have given formal talks. I own 40 books on circumcision and have many file drawers filled with materials. I wrote and published a novel in which circumcision is a key topic. In 1998, I joined a Phoenix-area NOCIRC/NORM group, whose men meet on alternate months to discuss circumcision issues and support each other in foreskin restoration. Both my twin and I have completed restoration, but we know we can never recover the specialized tissue long removed. For years, we have tabled at the annual Martin Luther King Jr. Civil Rights Day at a Phoenix park where we engage the public about circumcision issues. I have taken part in demonstrations and often carry a sign that says, “Informed Parents Reject Circumcision.”

I have come to know many of the giants in the intactivist movement through writings and attending the International Symposia on Genital Integrity and Children’s Rights – those held in Seattle, Boulder and San Francisco. Intact America, co-sponsor of those gatherings, has given such new energy, resources and force to the cause, under the keen professional leadership of Georganne Chapin. At the 13th Symposium in Boulder in 2014, Marilyn Milos recognized me as one of about 35 “pioneers” of the Intactivist movement, and each of us got to address the conference briefly.

I have an Arizona personalized license plate (NOCIRCM) displayed on the child abuse prevention plate series carrying the words, “It shouldn’t hurt to be a child.” My truck carries six provocative bumper stickers, including one that reads, “Forced Circumcision is Sexual Assault.” When I look in my rear-view mirror, I am heartened by the fingers pointed to those messages. Drivers and passengers behind me then launch into conversations and often take cellphone pictures. It hopefully plants seeds in their minds that forced circumcision is wrong.