MARCH 2015: Just a few weeks ago, the intactivist movement lost one of our great champions, Elizabeth Noble. Throughout her career, Elizabeth focused on the physical and spiritual well-being of mothers and their infants; and she made waves when she featured a photograph of her naked, intact son on the cover of her book, The Joy of Being a Boy.

Elizabeth was born and raised in Australia, where she received degrees in physiotherapy, philosophy, and anthropology. She moved to the United States in 1973, and in 1977 she founded the Section on Women’s Health of the American Physical Therapy Association. From 1970 to 1990, she was founder and director of the Maternal and Child Health Center and Cambridge Physical Therapy in Cambridge, Massachusetts.

Elizabeth was internationally celebrated for her focus on women’s health and the importance of education. She gave prenatal education classes, and taught infant massage to new mothers. Her friend Marilyn Milos, founder of the National Organization of Circumcision Information Resource Centers, recounts: “During one class, Elizabeth mentioned the difficulty circumcised babies have in their pelvic region because of the trauma held there. When she said the word ‘circumcision,’ one of the babies who had been quietly suckling pulled his head away from his mother’s breast and let out a high-pitched scream that went on for several minutes. Elizabeth, although amazed and startled by the baby’s reaction, knew he had been circumcised. A couple of years later, when she was teaching another class, she mentioned what had happened in that earlier class and, again, another baby reacted to the word circumcision in exactly the same way. Elizabeth immediately knew this baby was also circumcised.”

“Elizabeth always said what was on her mind and she didn’t hold back,” says Milos. “She always was outspoken about the harm of circumcision and was delighted to have The Joy of Being a Boy so welcomed and appreciated by the intactivist community.”

Intactivist photographer and videographer James Loewen interviewed Elizabeth in 2013. In this video, among other topics she discusses the controversy surrounding the publication of that book (pictured at right) and how surprised she remained that so many otherwise enlightened Americans manifested an aversion to the normal male body. 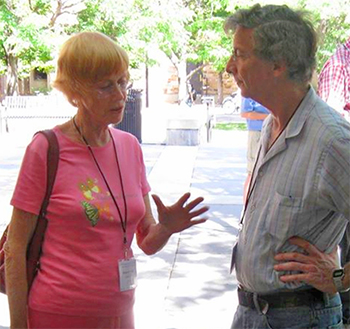 Elizabeth attended the Genital Autonomy Symposium in Boulder, Colorado last summer. She was clearly ailing, but able to partake in the events. You can see her below in thoughtful conversation with Ronald Goldman, author of Circumcision: The Hidden Trauma. “She was a pioneer,” says Georganne Chapin, executive director of Intact America. “She will be missed.”