JULY 2015: This July we honor David Grant, intactivist and volunteer extraordinaire, whose on-the-ground organizing made Intact America’s presence at the 2015 NYC Pride March a rousing success.

David was born in South Carolina in June 1969 – just weeks before the Stonewall Riot and one year before the first Gay Pride March. “I always felt great inspiration about being born in a year that shook the world,” he says, “and in times of self-doubt and fear, I use that to pull me out.”

“I knew as early as I have memories that I was gay, and though I had loving parents, I knew my answers lay elsewhere.” So at the age of 17, David jumped on a Trailways bus to New York City.

His intactivism started years later with a tiny mention of Intact America in Next magazine, a popular weekly that covers NYC gay nightlife. In a small column, it briefly mentioned actor Alan Cumming’s appearance at a local club, where he “suddenly” brought up the subject of foreskin and talked about his support for a group called Intact America.

“Alan talked about the way the foreskin enhances sexual pleasure, things I didn’t know,” says David. “I immediately got on my computer and found Intact America’s website. My life would never be the same. I refer to it as the deeply personal, ‘Killing Me Softly With His Song,’ effect. When I read about the harm from circumcision, it was my own story. All the complications… I knew them well because I lived them, and still do.”

From that time, David joined intactivist campaigns, demonstrations, and protests. “You name it, I do it. Online and on the street. I strike from all angles with my own money, my time and – believe me – my own blood, sweat, and tears.” 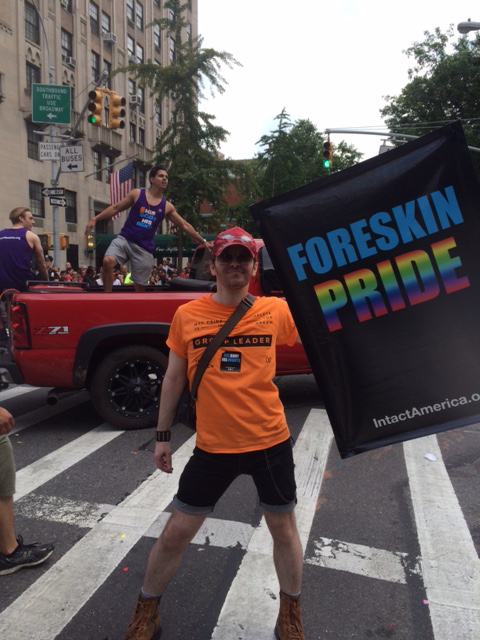 “For the most part the gay community is very open to the intactivist message. What we have in common is questioning social norms and religious bigotry, and we fight for the same cause: Neither our parents, nor our culture, nor any religion owns our bodies, and only we can decide what to do with them. So, as they say, we are family. Also, gays have always been parents, but today it’s openly and legally accepted. Tragically, though, it’s still quite legal to cut children’s genitals if they are male. LGBT American parents, just like ’straight‘ American parents, are faced with the same question of keeping their boys whole or taking a knife to them.”

Protest Group
In 2006, a small group of Intactivists were approved to enter the New York City Gay Pride parade – among them, Julia and Emily Legutko, who later took up the Intact America banner. This year’s march, on the heels of the Supreme Court decision on same-sex marriage, was the largest ever. David’s organizing skills and passion were much in evidence, as this former kid from South Carolina directed Intact America’s demonstrators, float drivers, disc jockeys, parade assistants, demonstrators, and dancers through the complexities of an event attended by more than a million people. The resonance of Intact America’s message was abundantly clear, and the sparkle in David’s eyes – as he danced and twirled and strutted his banner – was priceless.

“When I came to New York, all my dreams were here, just waiting for me,” says David. “The greatest of them was Gregory, my boyfriend of 23 years, who supports my intactivism, and whose love is as constant as the North Star.”

“The moment I heard Alan Cumming’s words and discovered Intact America, there was a realization inside of me that would reshape my future. I knew I had been treated like cattle, put through a slaughter house, carved up and branded with a scar I will carry to my grave. But I will not go quietly to the grave with this indignation. I will do everything in my power to stop another child from being sent to the meat factory. And one day we will prevail.”