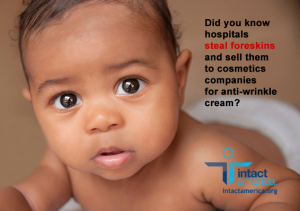 The following is an actual comment made by someone on Intact America’s Facebook page. We often see comments from men who defend their circumcised status, but this was the first time I’d seen someone finding solace in the idea that his foreskin was (perhaps?) used for a “good purpose.” Here’s what he wrote, verbatim: 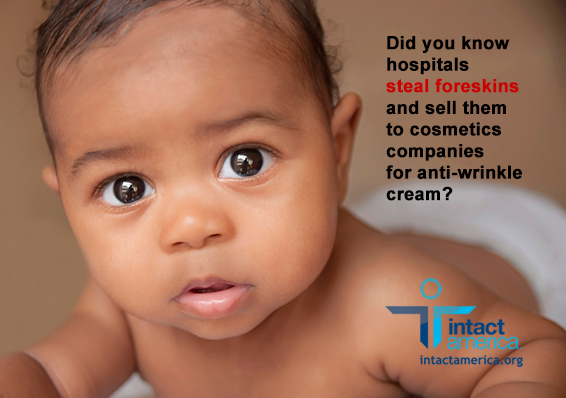 What im going to say may shock you, i am circumcised and my penis is in fact not a gnarled calloused lump of dead flesh devoid of feeling, and because i was born in the 80’s my foreskin went to make a skin graft for a burn victim, today they are also used in stem cell research…its ok guys really.

And this was my reply:

It’s great that you are happy with your body and NOBODY should be allowed to take that happiness away from you. But there’s a phrase for what you’re referring to, with regard to the worthy use of YOUR bodily tissue without your consent. It’s “compelled altruism”; in other words, your “donation” was not your choice. How would you feel if you found that your foreskin was used, not for artificial skin for burn victims, but for $200/quarter ounce anti-wrinkle cream? Also, what about the fact that somebody other than you is making a fortune selling products made from your stolen foreskin? Is that really ok? How can it be that the foreskin deemed to be so useless and problematic to its owner is, at the same time, so valuable to others? There’s something wrong with that.

Our Facebook audience is growing exponentially, and we’re getting more and more people thinking about circumcision for the first time; some of those who haven’t thought about it before react by defending the practice, as did the man who left the comment repeated above. When people come out like this, we intactivists have a chance to educate them in a really powerful, far-reaching way. The conversation may get intense and heated, but every conversation is important and takes us toward achieving our goal – ending the abuse and mutilation of babies.