NOVEMBER 2013: Intact America is pleased to honor Greg Hartley, Director of NOCIRC Pennsylvania (part of the National Organization of Circumcision Information Resource Centers). He’s also a member of Intact America’s Steering Committee and a devoted champion of boys’ rights to genital integrity. Oh, and in his spare time he’s a nuclear engineer!

Greg’s introduction to intactivism came through fatherhood. In 1998, he and his wife adopted their son from Russia, and learned that most of the world’s males are intact. A long-time tobacco control advocate, Greg had experience in grassroots activism. He was drawn to the intactivist cause and uses his experience to promote genital integrity.

In 1999, Greg coordinated the incorporation of several Pennsylvania chapters into a statewide non-profit organization, which helped to raise funds and expand outreach opportunities. When NOCIRC Pennsylvania funded two billboards near the largest maternity hospital in the state, Greg met with hospital staff and maternity nurses to improve the hospital’s childbirth education curriculum. He also worked with his local school district to improve accuracy and remove bias from health education programs.

Because adoption was the impetus for his intactivism, Greg remains focused on the specific issue of circumcision and adoption. He taught a class on circumcision and intact care to prospective parents at the International Assistance Group in Pittsburgh, and provided information to other Pennsylvania adoption agencies. At the Seventh International Symposium on Human Rights and Modern Society, Greg presented a paper on the adoption aspects of intactivism – it was later published in the book “Flesh and Blood.”

Greg is a true champion of the intactivist movement, conducting television, radio and newspaper interviews with local media, participating in demonstration and protests, and educating the public about circumcision wherever he can. NOCIRC Pennsylvania has hosted exhibits at several conferences and childbirth fairs, most recently the Mother Earth News Fair (a weekend event with more than 18,000 attendees). He recently told Intact America, “It’s hard to believe that 2014 will mark fifteen years of intactivism for me. Wouldn’t it be great if next year was the last?”

“Greg Hartley combines a personable, accessible manner with passion and a solid, factual approach to the importance of a child’s right to an intact body,” says Georganne Chapin, executive director of Intact America. “Greg’s strategic thinking has been immensely useful to Intact America since the organization’s founding. I sleep better knowing that Greg has my back!” 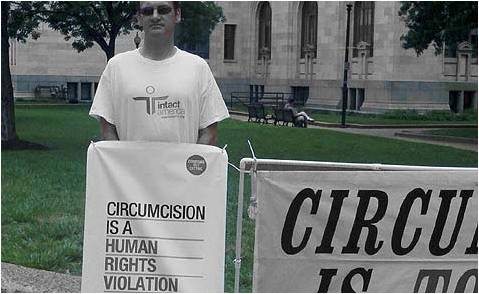 In a video interview conducted by James Loewen at the 2009 Genital Integrity Awareness Week, Greg describes the perspective of a circumcised father and intact son. “Parents authorize circumcision of their children based on ignorance. Most cut men believe that they are normal, and many American women view cut as normal…but they have no basis for comparison. When the informed consent process includes a video of infant circumcision and a complete description of impaired functionality, parents will be forced to confront the harsh reality of this procedure. Knowledge is power – we can stop the cycle of genital cutting. Watch Greg’s video interview: