Eliyahu, a writer, director, cinematographer and photographer, produced the film in 2007. It examines the subject of male circumcision from a religious, scientific and ethical perspective. Using both research and interview footage of rabbis, philosophers, and scientists, Cut challenges viewers to confront their biases by asking difficult questions about this long-standing practice.

Eliyahu grew up in an Orthodox Jewish household in Brookline, Massachusetts. When he was 13, his family moved to Israel where he lived until he was 19. He next enrolled in medical school in the United Kingdom, but after three years, Eliyahu decided to abandon medicine and follow his dream of becoming a filmmaker. He has since earned two degrees from The School of the Art Institute of Chicago. Cut is his first feature-length film. 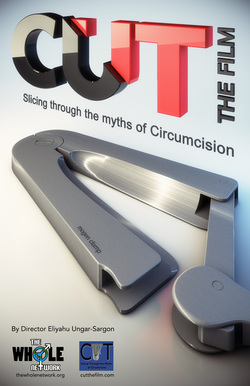 The film has received positive reviews, and has been embraced by the intactivist community. Says George Robinson, film critic for Jewish Week, “I approached the film with a complex set of preconceptions and, to the filmmaker’s great credit, after it was over my certainties were utterly shaken.” The WHOLE Network, a growing grassroots intactivist organization, is sponsoring the film’s United States tour; you can see the full list of showings here.

The trailer for the film is available on the Cut website, as is the abridged version of the film. You can also listen to his podcast here.

“Eli’s contribution to intactivism is incalculable,” says Georganne Chapin, Executive Director of Intact America. “His thoughtful sensitivity imbues every minute of his film, as well as his interactions with others. His work will truly make a difference in the lives of many boys and their families. Intact America is proud to have Eliyahu Ungar-Sargon on our Board of Advocates.”