MARCH 2011: This year marks the 18th anniversary of Genital Integrity Awareness Week, which takes place from March 28-April 3. Every year, intactivists from all over the country travel to Washington to march on the Capitol in defense of babies’ rights—and David Wilson is the driving force behind this effort. 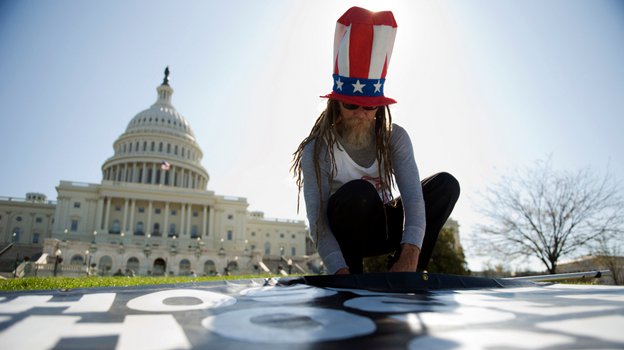 David, a father and grandfather from Cocoa Beach, Florida, has been marching on Washington for Genital Integrity Awareness Week for the last 18 years. When he started, he stood completely alone on the steps of the U.S. Capitol. Now he’s accompanied by hundreds of fellow intactivists. “The routine sexual mutilation our infant males must stop,” he says. “It is a total violation of humanity and inflicts on the male and his sexual partner(s) an array of future sexual problems.” David’s reason for organizing the annual Demonstration / March Against Infant Circumcision is simple: “The two most important things we can do are educate and demonstrate. We try to educate on a daily basis. We must also demonstrate.”

Genital Integrity Awareness Week was established to coinicide with the anniversary on March 30th of the federal law against Female Genital Mutilation and the beginning of Child Abuse Prevention Month (which occurs each April), to bring awareness to the fact that infant circumcision is risky, painful, harmful, medically unnecessary, and unethical. If you’re able to make it to Washington, you can find out what’s happening when by visiting David’s website, StopInfantCircumcision.org. You can also RSVP to the live event on Facebook, as well virtual events on Facebook.

“David Wilson is an extraordinary human being,” says Georganne Chapin, Executive Director of Intact America. “He’s willing to endure considerable personal and financial sacrifice to appear—every one of the past 18 years—in our nation’s capital, to call attention to the routine mutilation of America’s baby boys. Few of us have the bravery or perseverance to do what David has done for the intactivist movement.”