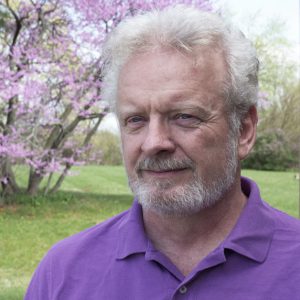 OCTOBER 2011: Dan Bollinger, who serves on Intact America’s Steering Committee, is one of the most prominent intactivists in the movement today. Director of the International Coalition of Genital Integrity (ICGI), Dan writes press releases as well as publishing scientific studies, provides insight and direction, and attends conferences (that’s him below, at this year’s AAP conference). He is tireless in his efforts to end the practice of infant circumcision in the United States.

Dan’s involvement in intactivism grew out his commitment to equal rights; he fought to help pass the Equal Rights Amendment in Indiana when he was in college. “Circumcision was an issue I could relate to—not only because I was circumcised, but because of the equal rights aspect. For most of my life I’ve been troubled by night terrors that I later became convinced were an early recollection of my circumcision at age three-days.”

Dan’s work in defense of boys’ rights to genital integrity spans decades, and his contributions to the science that supports keeping boys intact is incalculable. In 2010, he published a critical study showing that at least 100 babies die each year from unnecessary circumcisions. His most recent article, co-authored with Robert S. Van Howe, MD, shows that circumcised men have a 4.5 times greater chance of suffering from erectile dysfunction than intact men.

In addition to ICGI, Dan also founded the Boys Health Advisory, whose Circumcision Decision-Maker (now defunct) provides valuable information and guidance for parents who might be thinking about circumcising their sons. The text states, in part: “The foreskin is a vital, functional part of the male genital anatomy, and it is not a birth defect. Therefore, if there is not an absolutely urgent reason for removing it, it should remain intact—for ethical, psychological, and sexual reasons. The boy himself, when he is old enough, is the only person who should make any decision affecting the looks and function of his penis.”

“Dan Bollinger is a wonderful advocate for the rights of boys and men, and a wonderful colleague,” says Georganne Chapin, Intact America’s Executive Director. “He always has good ideas, and is always willing to help. Intact America is both fortunate and proud to count Dan among our most loyal supporters.”