“It wasn’t my choice, but I’ll live with it forever.”

One man spent his childhood in fear of his mother. The other struggles daily with feelings of loss and violation.

David and Andy are proof that circumcision is painful and harmful. 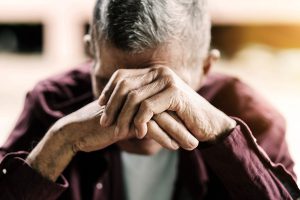 Men of all ages have generously shared their stories of circumcision on the Intact America “Voices” page.

At nearly 80 years of age, David has had a rich and full life. He’s a Vietnam veteran who had a career in the Coast Guard before retraining to become a clinical psychologist.

But he has also lived with a severe trauma from the mutilation of his penis when he was a newborn.

David grew up feeling as though he could not trust his mother. When he was in his 40’s, he had a strong recollection of being a hungry baby – with intolerable pain in his genitals.

“I asked my mother if she could recall any accident or difficulty when she was nursing me in infancy. I was shocked by her immediate explosion of emotion and the specific details. She named and swore at her obstetrician, telling me how he had nearly cut off the end of my penis and then sewn it back on with five stitches.

She told me the doctor had insisted that newborns did not feel pain, that the circumcision process did not hurt and could not be the cause of my distress in her frantic attempts to feed me. She told me how the doctor said that her difficulties in comforting and nursing me were due to her breasts being too small and her milk inadequate. She told me how agitated and terrified she was in her attempts to care for me.

Her powerful feelings of inadequacy, regret, helplessness, guilt and rage were evident as she told me things she had never before spoken about.”

His mother’s story helped David make sense of beliefs and behaviors that had affected him all his life.

“I had developed an ability to accept and tolerate dangerous and painful circumstances.”

David was eventually able to repair the relationship with his mother, but the physical damage to his body and the psychological impact of his circumcision remain with him today.

Your gift to Intact America will help educate the public, hold health professionals accountable, and support men like David and Andy who had no choice in their circumcision, yet suffer terrible consequences.

Find out more or donate here.

Want to share your circumcision story? Send an email to [email protected] and tell us what you’d like to write about. If you need some help writing your story, our editor will be happy to oblige.

Your story can help other people who share your feelings or experiences. Every story brings us closer to the end of this terrible practice.