Ask Marilyn – Circumcised vs Uncircumcised Babies: How Do You Care for One or the Other?

My baby boy was circumcised when he was born two years ago. Once the wound healed, it’s been easy to keep his penis clean. But my friend says that her son’s intact penis is easier to keep clean. Who is correct?

Your friend is correct. A baby boy’s natural penis is protected by his foreskin, which is fused to his glans, or the head of the penis. Although the foreskin has a small opening so urine can pass, it is designed to protect the glans from foreign elements and bad bacteria. All mom or dad needs to do is wash what can be seen, and never force back the foreskin to wash under it. When the foreskin retracts on its own (the average age of retraction is around 10 years old), then the boy can pull it back, rinse the glans (head of his penis), and replace the foreskin over the glans again.

In contrast, keeping a circumcised baby’s penis clean is a lot more work, beginning with the circumcision wound itself. You can’t bathe the baby while his wound is open. You have to cover the wound with petroleum jelly and gauze to protect it from the urine and feces in the diaper. After the wound heals, the exposed glans is constantly rubbing against the diaper (there are many complaints online of the diaper sticking to the wound)—again in an unsanitary environment. The constant abrasion can cause rawness around the urinary opening, which can then cause additional problems.

The foreskin provides physical protective as well as antimicrobial secretions that protect the urinary tract from infection, too.

If you do have another baby, and the baby is a boy, please read about the functions of the normal foreskin and consider keeping him intact.

Ask Marilyn – How to Stay Involved?

You wouldn’t remember me, but we met many years ago at a conference. I’m an intactivist. I donate my time and money to the cause as much as I can. I am writing to ask you how you have managed to keep going for so long. You see, I am very angry at having been cut. I blame everyone involved for not standing up to protect me when I was just days old. Some days the pain is unbearable. And then there are good days when someone listens to what have I to say when I comment on Facebook. I have lost friends and family from my stance. I am struggling to stay involved in the movement. How do you do it? How do you stay sane amidst this insanity?

I truly understand the anger you feel for not having been protected from circumcision. The difficulty is, who exactly do we blame? I’m a regret mother because my culture and my doctor lied to me. I didn’t even know what the word circumcision meant, and my doctor didn’t explain. Instead, he said, “it doesn’t hurt, only takes a minute, and will protect your son throughout life.” I’m pretty sure your parents were pressured and lied to like I was, too. They surely had no way of knowing the pain it was going to cause you.

I will always feel terrible for not protecting my sons. What has driven my intactivism over the decades is working to stop circumcision so that other mothers and their sons won’t experience such pain. I encourage you to continue to speak out, too, about your experience. If some people don’t want to listen, it’s probably because they are defensive or in denial about what happened to them. But while they might reject your arguments, they cannot reject your experience, your truth.

This may fall into the category of TMI, but we are a sex-positive household, and no topic is taboo. My 14-year-old son is going through puberty and is worried that his foreskin pulls back only about half-way. He told me that it sometimes hurts if he “goes too fast” when he masturbates. Is this something we should be concerned about? Is it time to visit a urologist?

I am happy that you and your son can talk candidly about sex. You can explain to him that, just as you cautioned him not to forcibly retract his foreskin, he needs to be careful with his foreskin when he masturbates. Here’s why: One or two millimeters under the penile skin is a smooth muscle sheath called the dartos fascia. The dartos fascia covers the shaft of the penis and extends to the tip. The dartos fascia muscle fibers near the tip of the foreskin form a sphincter-like structure—or a ring—that acts like a one-way valve and shields the urinary opening.

Ask Marilyn – Why do they keep asking me about circumcising my baby boy?

Everything about my son’s birth was great. Except for one thing that keeps bugging me. Even though we knew early on that we’d keep him intact, people kept asking us if we wanted to circumcise him. I told my OB/GYN we didn’t want to, but on the next visit she asked. In the hospital, just about every nurse asked me even though our choice was written on my chart. This happened over and over before and after the birth. I was so angry I wanted to scream. Why do they keep asking? It made me begin to question our decision. Don’t get me wrong, I’m glad we didn’t, but geez, why weren’t they listening?

Congratulations for having the strength to protect your son’s right to his own body and withstanding the pressure of those who tried to coerced you to cut off the most sensitive part of his genitals. Circumcision is BIG business—a $2 billion-dollar-a-year industry for an unnecessary and harmful amputation, which is why doctors and nurses “sell” it so hard.

Doctors and nurses won’t admit it, but they know that circumcision is excruciatingly painful and traumatic. That’s why they do their genital cutting behind closed doors and prevent parents from hearing the screams or watching their babies suffer.

By keeping parents in the dark, health professionals can convince vulnerable and exhausted parents, right after their child is born, to circumcise their baby. If more parents knew what circumcision involves, they could stand strong and resist the pressure.

For example, a colleague and I videotaped a circumcision at the hospital where we worked. A childbirth educator showed the circumcision video to her class, and not one of the mothers circumcised their sons as a result. The educator showed it again to a second class of mothers. They didn’t circumcise their babies either—except for one doctor who was taking the class. Even worse, the doctor insisted that our video be censored. That’s how much doctors dread letting the truth slip out.

Fortunately, several anti-circumcision movies are available now that include actual circumcisions. I suggest watching The Circumcision Movie. Not only will you see that you and your husband were correct to protect your son, you’ll also learn that you are not alone in denouncing this anachronistic blood ritual.

Ask Marilyn – I was circumcised, and there’s nothing wrong with me. Why do cut men complain?

Some of my friends tell me they are bitter because they were circumcised as babies. They say they feel like they were robbed of ever experiencing full sexual pleasure. I don’t understand them. I am circumcised and enjoy sex very much. Honestly, I can’t imagine it being any better. Am I missing something?

You are not the only cut man who feels this way. If your foreskin is missing, it’s hard to imagine how it would feel to have sex with an intact penis. But the truth is that sex is better—yes, more complete—when your genitals are intact.

The foreskin is the most erogenous part of the male genitalia. It has tens of thousands of nerve endings that respond to the lightest touch. When the penis is erect, the foreskin slips back from the glans (the head of the penis) and folds into ridged band that is ultrasensitive. During intercourse, the ridged band of foreskin works to stimulate both partners as the glans glides smoothly in and out. Here’s how it works.

Although many cut men are willing to publicly talk about how circumcision has affected them emotionally, physically, and sexually, far more cut men find it hard to acknowledge that their genitals aren’t complete. They also are reluctant to admit that their parents—who were supposed to protect them—allowed a doctor to amputate healthy, normal tissue from their genitals.

I’m glad you are enjoying good sex. However, without a foreskin to protect it, your penis will likely lose sensitivity as you get older. Also, sadly, circumcised men are three to four times more likely to experience erectile dysfunction than intact men.

I hope this helps you to understand what your friends are saying, and that you will join with us at Intact America to end the cycle of circumcision that has caused so much harm to American men. 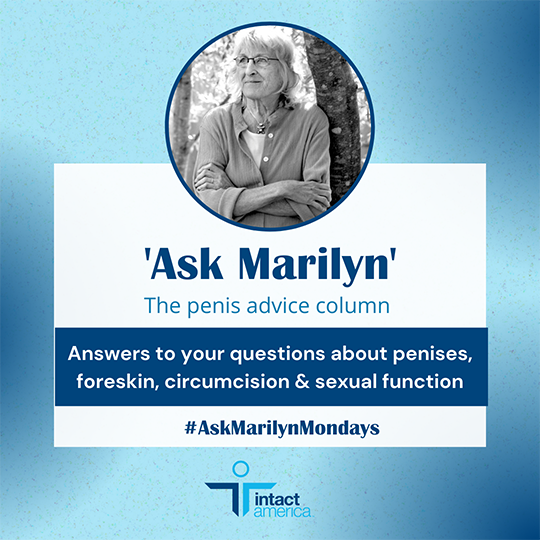 I just finished my freshman year at college, and I dated two women who were turned off by my intact penis. One refused to have sex with me. I’m happy I’m intact, but I want to stop surprising and being rejected women. Do you have any advice for me?

I am sorry that you have encountered women who do not know how wonderful it is to have sex with an intact man. Most American women are ignorant when it comes to the normal penis. Simple education is a good way to overcome their hesitancy.

Start talking about your normal penis when you think the relationship is likely to become sexual. Tell her: “I have a normal penis, the one I was born with, just like Leonardo DiCaprio and Russell Crowe. And Elvis Presley was intact, too.”

One more thing. Women worry they don’t know how to handle an intact penis during foreplay and oral sex. So help them out. Tell them or show them what you like. In the end, good sex is rooted in good communication, whether you are intact or cut.