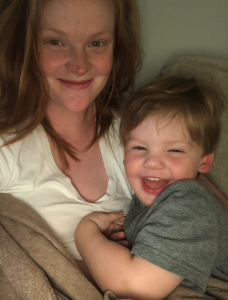 My son Jude is a victim of forced retraction, a terrifying experience that I witnessed and will never forget. It’s taken me almost two years to talk about this, but if I can help even one little boy by telling our story, it’s worth it.

Jude is two years old. When he was about two months old, he was vomiting and had diarrhea, and my mom and I took him to the pediatrician. He was pretty sick and the doctor wanted to rule out anything serious, so he referred us to Children’s Healthcare of Atlanta for tests. During the appointment, medical personnel were prepping him for routine tests while I answered questions related to his condition with another staff member across the room.

That’s when I heard him scream. To this day I’ve never heard him scream like that. I went over to him and I will never get that sight out of my head. A nurse had forcibly retracted Jude’s foreskin to get a urine sample, and I could see his entire glans. It was all purple and swollen and there was a little bit of blood. it was so terrifying.

I said, “You’re not supposed to retract him. This is not supposed to be happening.” She said, “No, you’re supposed to be retracting him at every diaper change. “I knew retraction was wrong, but I wasn’t as educated as I am now about how it all worked, and I didn’t have the facts in my head ready to counter their claims.

I knew forced retraction does happen, but it didn’t occur to me that it could happen in a children’s hospital. It wasn’t even in my head space. It’s one of those things you don’t think will ever happen to you or your loved ones.

When they gave him a pacifier with sugar water in it to calm him down, that broke me a little bit. I had never given him a pacifier. I’m supposed to be his comfort, not a pacifier. I started to hyperventilate and had to step out of the room to get myself together. I couldn’t pick him up. I couldn’t do anything for him.

A while later, a nurse supervisor came to talk to me. She was almost judgmental that we hadn’t circumcised Jude. She told me that I should be retracting his foreskin or I would cause him problems. My mom told her they had instead just opened him up to infection. When it was clear our conversation was going nowhere, she asked if I wanted to talk to the doctor about it. I said no, and when he came back in with the test results, he wasn’t at all concerned.

Jude was in pain for a couple of weeks. For a good week after it happened, I had to set him in the sink with water in it when he peed because he cried every time. It was so sad and he was so pitiful. When I put him in the car seat, the pressure from the buckle hurt him. I cried about it for weeks afterwards. It triggered postpartum depression.

When we were at the hospital, I had googled some facts about the dangers of forced retraction. That’s when I found David Llewellyn, an intactivist lawyer in Atlanta, where I live. He has dedicated his career to ending circumcision and forced retraction. It’s not easy to take on these cases here because no one questions these practices.

Through him we filed suit for battery, nursing malpractice and intentional infliction of emotional distress. We proposed a settlement that would, among other things, require the hospital to institute proper protocols for care. To my husband and me, that is the whole point of the suit. The hospital didn’t agree to those terms, so the case will be going to trial.

I’ve found support among new friends in the intactivist movement – in Your Whole Baby and other mom groups on Facebook, and from Intact America. I’m a really introverted person, and speaking out is hard. But I never want another mother to feel like I did. I’m also shocked at how many people have told me they wish they hadn’t had their sons circumcised.

So I’ve started planting seeds in conversations. It’s kind of an internal battle, building up the courage to say something. But it does feel good when people receive the message and open up their minds a bit. Most people say they hadn’t even thought about it. Sometimes they don’t say anything, and that’s OK. Even a few thoughtful words or a passing comment can be powerful, and they’ll remember it later.

I’ve been afraid of being perceived as a “crazy penis mom.” Now I’m at the point of being OK with that. I’m an advocate. It has pushed me out of my comfort zone—but that’s kind of what motherhood is.